His first published story, “In a Half World of Terror”, is up for auction at Heritage Auctions

Extremely Rare and Early Fanzine Appearance of Stephen King
[Stephen King]. “In a Half World of Terror.” Published in Stories of Suspense #2. Flushing, New York: MW Publications, [1966]. 36 pages (including covers), with King’s story occupying twelve of those pages. Mimeographed sheets, staplebound. Fine condition. One of Stephen King’s first appearances in print (he would have been either 18 or 19 when this was printed). This particular story was published the year before as “I Was a Teenage Grave Robber” in Comics Review, then revised and published here for Marv Wolfman’s Stories of Suspense. Wolfman would go onto greater fame for a lengthy run as the writer of The Tomb of Dracula where he would create the vampire-slayer Blade. This fanzine is extremely rare, with no copy on record at auction. An essential item for any serious King collection. Estimate: $2,000 – up.

Heritage Auctions – In a Half World of Terror 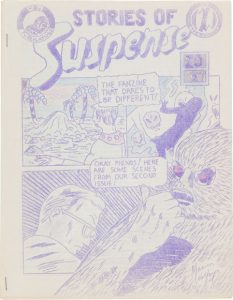 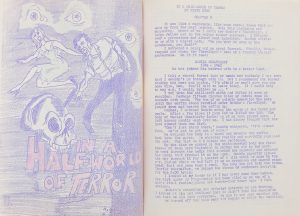