With 2 months until release date the first proof copies are showing up on ebay. These were only send to reviewers and publishers.

Would be nice to have one in my hands, but one can only dream.

From the publisher’s letter:

Scribner is thrilled to announce the publication, in June, of Stephen King’s newest novel, Mr. Mercedes. Hot on the heels of his bestselling and critically acclaimed Doctor Sleep, this new book will remind critics and readers why they love King all over again.

In the tour de force opening passage, a group of unforgettable but doomed characters gather in the pre-dawn hours to wait in line at a job fair. These are decent but desperate Americans, and their plight will be familiar to many. They are sitting ducks for a bloodthristy killer, who mows them down with a stolen Mercedes and then drifts back into the fog.

Moths later, Detective Bill Hodges, restless in retirement, receives a taunting letter from a person who claims to be “the perk.” Hodges will never catch him, the letterwrites says, because he will never kill again: “I have my memories and they are clear as a bell.” Hodges isn’t so sure. Besides, having a case on his hands again, even on an informal basis, is just what it takes to shake him out of his depression.

Accros town, Brady Hartsfield lives with his mother, with whom he has an uncomfortably close relationship. He takes solaces in his basement lair, where his technological expertise helps him execute his murderous plans. But is he as smart as he thinks he is? Or will Hodges, who finds even his cell phone a technological challenge, figure out who he is in time to prevent his next (and even bigger) attack?

You’ll have to read Mr. Mercedes to find out. One thing is for sure, though… you’ll never think about ice cream man the same way again. 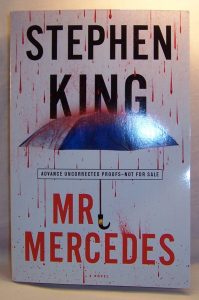 One thought on “Mr. Mercedes proof”