New short story, “Summer Thunder”, announced which will be published in a short story collection, published by Cemetery Dance. 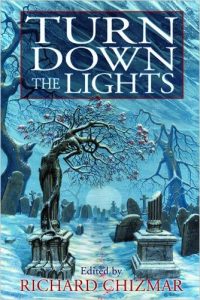 Turn Down the Lights

Turn Down the Lights
edited by Richard Chizmar

Update for Collectors:
To be published in three states including a trade hardcover for general readers (shipping in December) and two special hardcover editions for serious collectors (shipping in 2014), but there are no other versions planned at this time!

About the Book:
Free US ShippingIt was December 1988: George Bush had just defeated Michael Dukakis in the Presidential Election. Pitcher Orel Hershiser and the Los Angeles Dodgers had beaten the Oakland A’s in five games to win the World Series. People were waiting in line at movie theaters to watch Tom Cruise and Dustin Hoffman in Rain Man. Tom Clancy’s The Cardinal of the Kremlin and Anne Rice’s The Queen of the Damned were atop the bestseller lists. The most acclaimed genre books of the year were Thomas Harris’s The Silence of the Lambs and Peter Straub’s Koko.

Twenty-five years later, there have been seventy issues of Cemetery Dance magazine. There have been more than 275 signed Limited Edition hardcovers in the Cemetery Dance book line. There have been awards including the World Fantasy Award, the International Horror Critics Guild Award, and the HWA Board of Trustees Excellence in Specialty Press Publishing Award, as well as nominations for the British Fantasy Award, the American Horror Award, and the Bram Stoker Award, just to name a few.

Now, turn down the lights, flip the page, take my hand, and start the dance…

Table of Contents:
“Turn Down the Lights…” an introduction by Richard Chizmar
“Summer Thunder” by Stephen King
“Incarnadine” by Norman Partridge
“The Western Dead” by Jack Ketchum
“An Instant Eternity” by Brian James Freeman
“In the Room” by Bentley Little
“Flying Solo” by Ed Gorman
“The Outhouse” by Ronald Kelly
“Lookie Loo” by Steve Rasnic Tem
“Dollie” by Clive Barker
“The Collected Short Stories of Freddie Prothero” by Peter Straub
Afterword by Thomas F. Monteleone