Hard Case Crime has announced they will publish an Illustrated Edition of Joyland in September of 2015. The new edition will feature cover artwork by Glen Orbik, a map of Joyland illustrated by Susan Hunt Yule and more than twenty interior illustrations by Robert McGinnis, Mark Summers and Pat Kinsella.

From the press release:

Hard Case Crime, the award-winning line of pulp-styled crime novels from editor Charles Ardai and publisher Titan Books, announced today that in September 2015 they will publish a new illustrated hardcover edition of their bestselling title of all time, Stephen King’s JOYLAND. The acclaimed coming-of-age story set in a possibly haunted small-town amusement park spent more than 25 weeks on the New York Times Best-Seller List in paperback and ebook format. Aside from certain extremely limited editions for collectors, however, no hardcover edition of the book has ever been published.The new edition will feature a brand new cover painting by popular Hard Case Crime artist Glen Orbik, whose other covers for the series include books by Gore Vidal and Michael Crichton; a map of the Joyland amusement park illustrated in the classic ‘mapback’ style by Susan Hunt Yule; and more than twenty interior illustrations by acclaimed artists Robert McGinnis, Mark Summers and Pat Kinsella 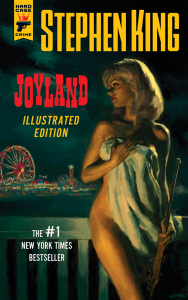