A new novel by Stephen King, Joyland, is to be published by Titan Books imprint Hard Case Crime in June 2013.

The book will be released as a paperback first, with e-book to follow at a later date. King said: “I loved the paperbacks I grew up with as a kid, and for that reason, we’re going to hold off on e-publishing this one for the time being. Joyland will be coming out in paperback, and folks who want to read it will have to buy the actual book.”

The title, set in a small-town North Carolina amusement park in 1973, tells the story of the summer in which college student Devin Jones comes to work as a carny and confronts the legacy of a vicious murder, the fate of a dying child, and the ways both will change his life forever.

Hard Case Crime editor Charles Ardai bought world rights in the title, with King’s novel The Colorado Kid previously released under the imprint. The deal does not affect King’s relationship with his usual UK publisher, Hodder.

Ardai said: “Joyland is a breathtaking, beautiful, heartbreaking book. It’s a whodunit, it’s a carny novel, it’s a story about growing up and growing old, and about those who don’t get to do either because death comes for them before their time.

“Even the most hardboiled readers will find themselves moved. When I finished it, I sent a note saying: ‘Goddamn it, Steve, you made me cry.'” 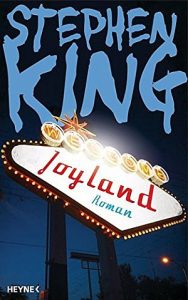